After the Brexit vote, a standard story is doing the rounds: the poor and uneducated are threatened by globalization. They respond atavistically, asserting their superiority over ethnic outsiders. As a result, they are fooled into voting against their own interests, for racist parties who do not really care about them.

This explanation comes in various flavours. To make it more left-wing, substitute “neoliberal world order” for “globalization”. But the basic recipe is widely reused. Obama talked about people “clinging to guns and religion”. This year, we are told it explains why people are voting for Trump.

There are some specific problems with applying this idea to Brexit. The context for the British vote was not just “globalization”: it was free movement of labour in the EU, combined with policy failures elsewhere that have led large numbers of people to seek employment in the UK.

Thinking so has a long history. Adorno and Horkheimer, exiles from the Nazis, wrote a psychological study of the rigid “authoritarian personality”, who craved the certainty and leadership of fascism. The most serious science behind this argument, though, comes from social psychologists studying group identity. In lab experiments in the 1970s, Henri Tajfel showed that when people were put into completely trivial, “minimal” groups – say, people who preferred an abstract painting by Klee to one by Kandinsky – they would discriminate against the other group, giving them less money, even if they themselves lost out by this.

Tajfel’s interpretation was that people were managing their self-esteem. If threatened – say by a negative evaluation from the experimenter, or in the real world, by poverty or economic insecurity – people respond by trying to boost their self-concept. Part of that self-concept is their social identity as a member of a particular group. White people, say, or Brits. So, they boost this by boasting of their membership, and denigrating rival identities – Black people or immigrants.

This interpretation provides a scientific justification for the benign contempt in which many people hold working class nationalism. Rather than goal-directed action, it is seen as a self-soothing response to economic trauma, the collective equivalent of holding yourself and rocking. 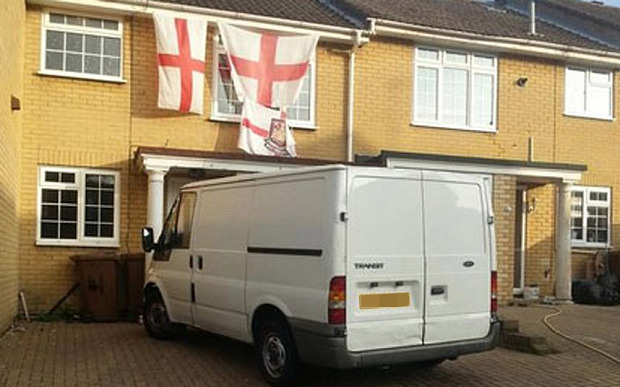 But this is doubtful. Starting from the scientific end, there are many alternative explanations for the phenomena Tajfel observed. One is put forward by the Japanese scientist Toshio Yamagishi. He describes human groups as “containers for generalized reciprocity”. In other words, you support your group above others, because you expect them to do the same for you.
This is intuitive. Football fans, clans, and families – all are expected to look out for each other. All organizations rely on informal, unspoken contracts, in which each of us is expected to “do our bit”. This is how collective actors are created – something so basic to social organization that it is embedded in our grammar. We.
The self-esteem based explanation for nationalism focuses on its opposition to the outgroup. This dimension is surely important. Conflict with outsiders strengthens group identity, as politicians have discovered, from Bismarck to Daniel Arap Moi and, yes, Trump. But another aspect has been underplayed. Nationalism involves an appeal to others in the ingroup. It says: “we have an especial claim on your help.”
Most people fudge their thinking on this topic. Ask someone in the modern West: are the lives of my countrymen worth more than those of people elsewhere, and you will likely get a shocked “no”. But our political system implicitly acknowledges the claims of nationality: all European welfare states spend far more to make the lives of their citizens better than they do on the lives of much poorer people around the world. (A Peter-Singer-style “effective altruist” ought, surely, to demand the immediate dismantling of our health and social security systems so that we could use the money on foreign aid.)
The nationalism or populism of the present day is a creeping suspicion that the elites of these reciprocity containers  are reneging on the bargain.
This is not obviously stupid. Here’s a picture of the change in the global income distribution over the past generation: on the left, the growth in the incomes of the world’s poorest; on the right, that of the richest: 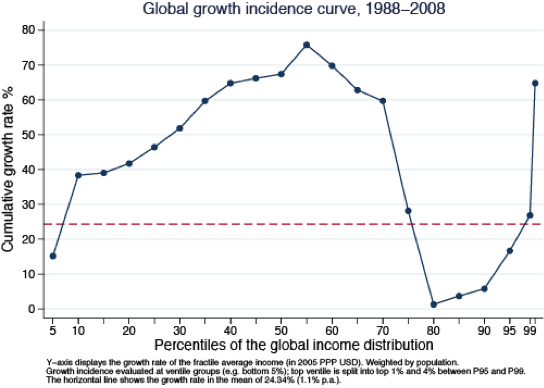 Every Peter Singer type should rejoice at that great big left-hand camel’s hump. That’s billions of people being lifted out of poverty, maybe the greatest increase ever in human happiness. But those in between the humps are the poor of the rich nations. They may suspect that China and India’s gain is their loss.
Economists – the controversial “experts” of the referendum campaign – have responded that really, the free movement of goods and labour is everybody’s gain, that losses are just illusory. But it is sadly true that economists often change their mind. Ten years ago most economists thought that globalization didn’t harm America’s poor. Now, the facts seem to have changed. No bad faith need be involved – just the complexity of the social world.
In the UK, most economists believe that immigration has increased our wealth without harming the poor, or not many of them. This is serious research. Jonathan Portes will tell you about it. But statisticians look at averages and can easily miss variation; they examine the past which may not be a guide to the future. If I thought I’d lost my job to an Eastern European, I might not be persuaded that on average, I had not. And I might also think that a wholesale commitment to freedom of movement in the EU would, sooner or later, lead to at least some equalization of wages between the UK and, say, Romania. Economic theory would suggest it. So would common sense.
And then I might think to myself: can I trust those people up there to protect me? Do they care about me more, or about the Romanians? Perhaps I should get rid of this elite and find another. This may be selfish, since the average Romanian worker is indeed needier than the average British one. It may be mistaken: the insurgent politicians of the populist Right are, to say the very least, unknown quantities. But it is not obviously stupid.
All societies have some form of ruling elite. But elite rule rests ultimately on the  consent of the governed, and that requires the trust of the governed that the elite have their interests at heart – their interests, and not, say, a nebulous idea of global fraternity. British society was traditionally snobbish, inward-looking and paternalistic. Upper class ladies would make visits to the deserving poor. Foreigners were beyond the pale. Nobody could accuse the modern elite, today’s residents of central London, of being snobbish or xenophobic. They will accept anyone from anywhere (so long as their money is good). Visits to the poor? You must be joking.
Wise researchers are sceptical of a simple opposition between rationality and emotions. We use rational models as benchmarks, sure, but real human reason is made up of a variety of cognitive heuristics, different tricks the mind has for making sense of the world. There is no reason to treat group identity any differently. Racism and xenophobia can inflict great damage, and lead to collective madness in its most unequivocal sense. That does not mean that every appeal to identity is a symptom of confusion. If we treat it that way, we may be patronizing, and letting down, people who have legitimate expectations of our support.

Some related papers:
Tajfel and Turner (1978) 'An integrative theory of intergroup conflict'
Yamagishi (2000)'The group as the container of generalized reciprocity'
at 8:06 am

Email ThisBlogThis!Share to TwitterShare to FacebookShare to Pinterest
Labels: populism